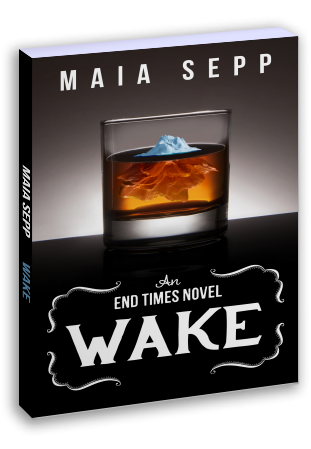 It’s 2020, and there’s a crisis brewing in the depths of the Greenland Ice Sheet that’s a threat to everyone on the planet. But California girl Camilla Brightly is an expat just trying to make a buck, working for an offbeat PR firm in Toronto. Their latest project? Everyone on staff has to get their “domestic helpmates”—anything from dishwashers to disco balls—networked via a client’s smart home automation system. Camilla doesn’t want Big Brother knowing that the only things in her freezer are the makings for a vodka smoothie, but that’s not the worst of her problems.

A hacker trying to take down her firm stumbles across a secret Camilla didn’t even know she was keeping, and her refrigerator is so smart it’s figured out how to stalk her. Global warming has reached a tipping point—and so has Camilla. She can’t stop the impending apocalypse...but can she save herself?

Wake—the prequel to An Etiquette Guide to the End Times—is a novel of climate change, unruly appliances, and finding a place to belong.